Mark Grotjahn: Nine Faces was one of the more memorable painting shows I saw last year, so I was certainly eager to see another Grotjahn exhibit. But arriving at the top floor of Gagosian was disappointing.

Presented on chest high pedestals was an array of what appeared to be crudely fashioned masks of corrugated cartons made by an art class of six year olds.  Knowing that they were made by an adult and fashioned of bronze would of course invite more consideration, but aside from the verisimilitude that the cast metal and finish had to actual cardboard and paint, what was the point? All of the works were of similar scale, and while the colors were applied with thick impasto and requisite expressive gusto, the paint seemed to lack the qualities evident in Grotjahn’s works on canvas. At the lower level gallery was another selection of comparable works except that when illuminated by the large skylight,  these had a vivid intensity beyond what could be seen under gallery lights alone.

The problem I found in all of the works was that they did not seem to justify the effort.  Simulating cardboard with cast bronze doesn’t have much of the transformative frisson that it might have had 30 or 40 years earlier. There was also little satisfaction from circling these objects. Trying to read the painted surfaces left me feeling only the color and gesture. As three dimensional constructs, there was no relationship to the space in which they sat and little spatial interest generated within.

For the most part, the paint remained flat, lacking the velocity and depth of Grotjahn’s canvases.  The title of his 2011 show at Anton Kern Gallery, “Nine Faces” invites comparison, if just for the titular implications. The much larger surfaces on his paintings with their muscle like striations and intense colors propelled the eye over the entire canvas.  In the gallery press release, the painter, Carroll Dunham, was able to characterize the work of “Nine Faces” far better than I might:

“[They] are readable to varying degrees from painting to painting in the torrents of colored lines that are the basic unit of activity. […] They weave complex spaces that may really be the subject of the work. Faces are the nominal subject, but the lines seem to pass around and through them, almost as though the faces are already physically present and the lines cascade over them like fast water over rocks, revealing their contours by inference.”

In contrast, the Mask Sculptures seem unable to transcend their nominal subject matter. 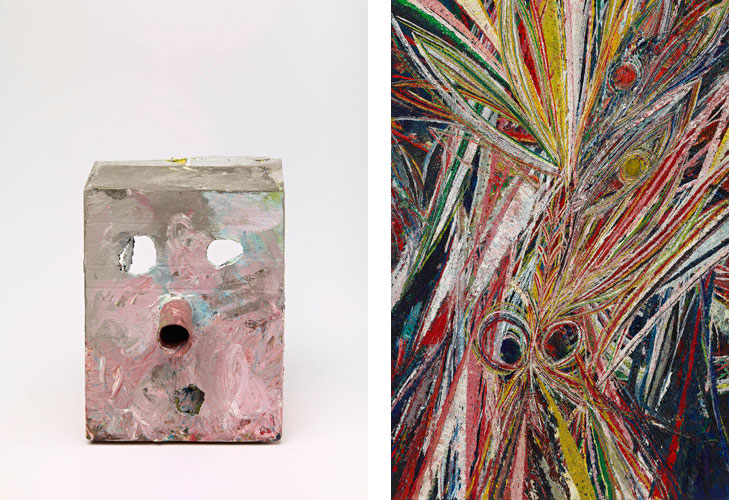