With the exception of a few practitioners (for example, Michael Light and David Maisel, both discussed in this blog), the attraction of aerial photographs seems subject matter driven. Photographers and audiences alike seem satisfied with the bird’s eye view of the landscape we usually see at eye level. The typical aerial photographs exploit the regular sense of design, pattern and bright colors of the built environment- urban canyons, suburban tract housing, sinuous concrete highway interchanges, majestic mountains and amber waves of grain. These predictable images abound in the archives of Stock Photography agencies and on the internet. Aside from the overhead viewpoint, these photograph offer little stimulation.

In contrast to the forgoing, Emmet Gowin’s aerial photographs, which he began in the mid 1980s remain revelatory. The power of these toned black and white photographs of the scarified land of nuclear test sites is not because the images show novel perspectives of familiar scenes from unfamiliar perspectives. Instead, it was Gowin’s use of the expressive qualities of the silver print that created imagery that transcends description.

While the monotone view of black and white photography is intrinsically abstractive and Gowin’s mastery of the medium has always yielded imagery distinctively his own, with the new work he has forsaken the distinctive practice for which he is best known, choosing to work with a digital camera and in color. That digital photography can with ever increasing fidelity depict the world, makes it ever more a challenge to make images which impart more than a representation of what was in front of the lens; in Gowin’s hands a digital camera has produced color studies of Andalucia that are as eloquent as his black and white work.

The textures and colors and gradient tonalities of these new landscapes are unexpectedly engaging. In the photo “Montes Occidentales, Granada, Spain,” regularly spaced trees planted across a sloping hillside inexplicably appear both as dimples or nubs. Scale in this work is baffling: the much larger trees of the irregular woods surrounding the orchards look more like moss than forest. The orchard trees look more like bushes. 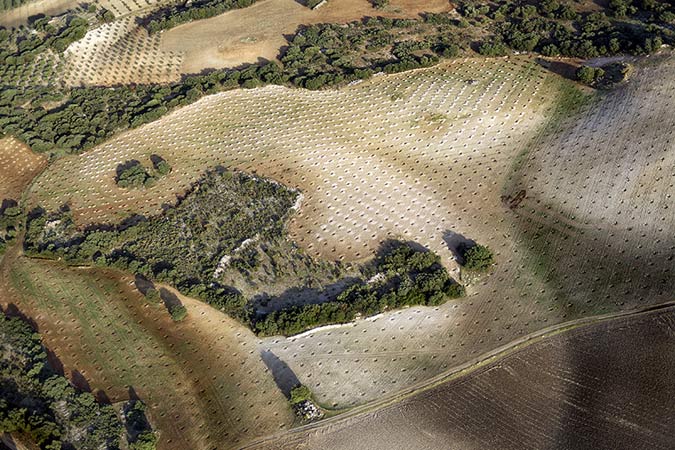 The intricate details of Gowin’s photographs invite close inspection, and the rewards are delightful. “The Guadix-Baza Region, Granada, Spain, 2012”, a study in brown and tan depicts a landscape after tilling. The randomly shaped lots divide the photographic frame into a patchwork of striated browns and tans. Unlike everyone’s favorite- vast, flat american farm land grooved by the harrow disk, the irregularly inscribed lines of this image and the shadows of clouds dappling the land all make for an ambiguous reading of the lay of the land. This is particularly so within the center of the image where the the scroll-like contours of the lot can be seen as a scrunched up area rug. 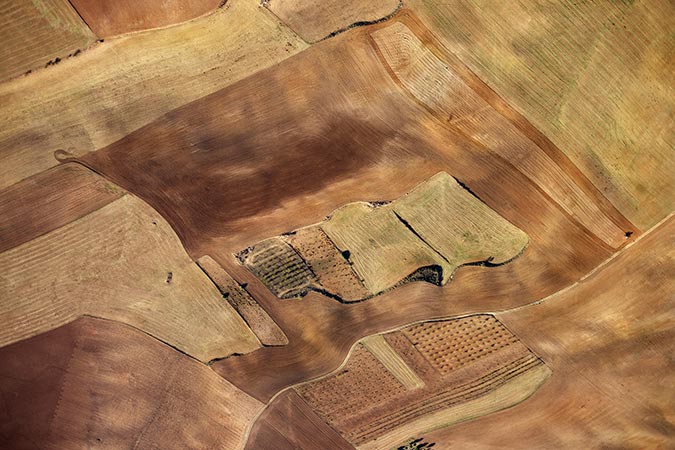 “The Montes Occidentales, Granada, Spain, 2012” employs a more vibrant pallet. Made in early morning or late in the day, the raking sunlight created long shadows behind the trees and within the low spots of a rolling terrain. The image is diagonally bisected by a meandering road, blue in color. The lower portion of the photograph, a matrix of textures and pattern, the upper section impressionistically mottled in what look like dustings of colored powders, yellow, greens, whites and browns. 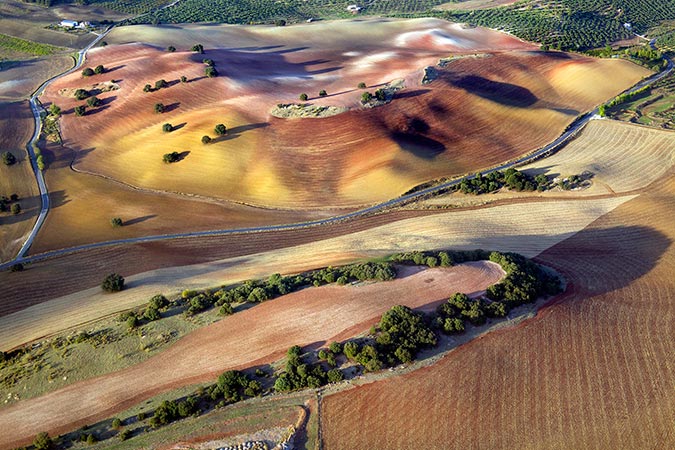 For eyes other than Gowin’s I’d think that his subject matter would have appeared rather faded and not particularly interesting; his new photographs are a gorgeous surprise.