As has happened all too many times, after the shooting in Aurora, Colorado many want to know, how is that an ordinary (or a not so ordinary) individual can own the same high powered semiautomatic guns used by soldiers and police?  If I may speak for the city dwellers I know, the concept of gun ownership might be a hunting rifle or a shotgun. Until recently I knew of not one New Yorker who owned a gun. In New York, few conversations even mention guns.

Growing up in the suburbs and attending summer camp exposed me to gun culture such that as a teenager, I had nagged my parents until they permitted me to own a 22-caliber rifle.  Its use, limited to target practice, was always with parental permission. The bolt and ammunition were both hidden away so that I could never use it without my father being on premises.  In time, I became more aware of the senseless gun violence of our society and I began to rethink the idea of owning a firearm. About the age of 17, I sold the rifle back to the gun shop and used the proceeds to buy some more photography equipment.

Today my arsenal is limited to an installation of 20 different red training handgun models which are mounted on the wall of above the fireplace as my ironic riff on the traditional musket mounted over the fireplace mantle. 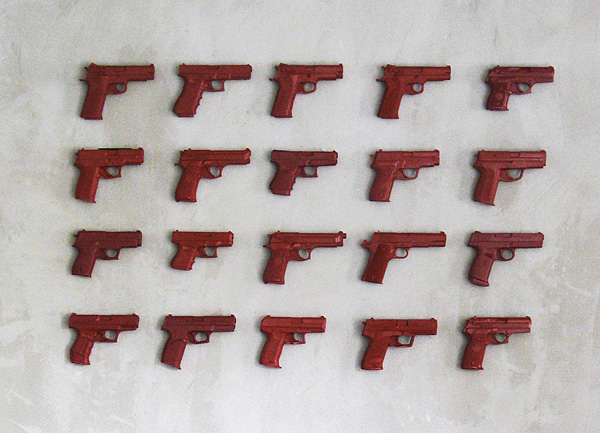 But with my recent subscription to Cable TV, I have been reintroduced to gun culture’s many shapes and forms. Watching with an explorer’s fascination for the unknown, I have had startling revelations about the gun interests of Americans.  Not satisfied with rifles and shotguns for hunting or target practice, their taste in firearms is more catholic.  Americans have a great fascination for military pistols and assault rifles.  There are plenty of shows celebrating military snipers and associated weaponry on The History Channel. The Outdoor Channel has at least a dozen gun related programs, including: Babes with Bullets, Choose Your Weapon and Gun Nuts.

Two family oriented gun shows on Discovery Channel are regular viewing for me! In Sons of Guns, Will Hayden, father and daughter, Steph own Red Jacket Arms, a Baton Rouge LA. gun shop staffed by what we city slickers might characterize as rednecks. In many episodes Will directs his crew to modify military surplus armaments such as assault rifles, flame throwers or anti aircraft guns. Typically, a customer of the shop comes in with a military surplus weapon, which had been rendered inoperable so that it could be civilian owned. A good portion of the show would dramatize the procedures necessary to restore functionality to the weapon, the sourcing of ammunition and a subsequent shooting party in the woods somewhere. Each show ends with a fiery explosion, high fives, and hoots and hollers.

If the cast of Sons of Guns is too country for some, American Guns presents the more suburban apple pie Wyatt family owned gun shop in Colorado called Gunsmoke. The show, first broadcast at least one television season later, is remarkably similar to Sons of Guns, except that the cast is more wholesome and photogenic. Whereas Will Hayden, paunchy and ill-kempt, his raccoon eyed daughter and staff converse in drawling country colloquialisms, the Wyatt family is much more tidy and perky.  Family head and owner of the business, ex police chief Rick Wyatt, dressed in Gunsmoke custom printed polo shirts and neat blue jeans enthusiastically dispenses gunsmithing technique, business advice and family values to his wife, two children and store staff.  His wife Renee and daughter Paige, conventionally pretty, with blond hair, eye makeup and ample breasts sheathed in leotards play active rolls in the running of the business.  The soft spoken and obedient son, Kurt, works for his father as a gun engraver and also participates in the trading of guns.

The two programs seem to serve different customer bases. Red Jacket Arms has a down home and military veteran clientele, while Gunsmoke’s patrons are often wealthy Coloradoans living in huge mansions.  In these shows, the question has never been raised about the propriety of civilian ownership of any of these pure military weapons.  A customer comes in with a demilled (the US Bureau of Alcohol and Firearms requirement that the weapon be cut into pieces) WW 2 German machinegun and Red Jacket makes it operational and fully automatic. Thanks to Gunsmoke, a young woman, purportedly a competition shooter, goes home with a grenade launcher mounted to her M-16 assault rifle. Red Jacket Arms fulfils the wish of a customer to have the same kind of shotgun with silencer as used in the film, No Country for Old Men. These gun merchants fulfill customers’ dreams- however extreme.

If the casts of the two shows represent different demographic strata, the binding interest of guns would likely draw the same viewers to both programs. Anyway, the featured guns might seem more appealing than some of the cast members who often snipe (verbally) at each other.  As common with reality shows, often times there is suspense about whether or not critical tasks can be completed on time. Mistakes are made and periodic tensions and conflicts amongst the men of both gun shops arise. Their occasional outbursts of anger and hostility for each other contrasts their exclamations of love for guns, suggesting that they too prefer the weapons to each other And it’s not only testosterone: Renee, Paige and Steph are also very demonstrative of their love for guns in word (typically,”that is so bad-ass) and deed, blasting away with all manner of weaponry.  For the less macho female viewers, both shows have featured femme weapons painted with pink accents individually developed by Paige and Steph. One American Guns episode featured a husband and his gun averse wife shopping for matching his and hers pistols. Cajoled by her man, she attended the Gunsmoke training course and the episode ended showing her happy with her own  pink and white revolver.

American Guns and Sons of Guns demonstrate individuals having their gun fantasies made real. Whether one customer wants a Civil War cannon built or another wants a WW2 AK-AK gun, these ingenious craftsmen will figure out a way to satisfy their wishes. In this TV world, the destructive potential of these weapons is limited to the frisson of seeing inanimate objects being destroyed by the newly completed weapon. Filmed in high definition and high-speed video, the weapons are presented as seductively as Paige Wyatt in short shorts.  Close-up shots of an M-16 rifle on full auto ejecting shiny brass shells in slow motion or images of muzzle flash followed by the actual bullet leaving the barrel are the money shots of this gun porn.  Usually featuring two different weapon stories, every show ends with shit being blown up, the exploded targets shown from at least two separate angles and one slow motion shot. After the smoke clears, the gunsmiths, and customers, all spent, are pleasantly satisfied.

These shows celebrate gun ownership in America. By their telling, it’s the American way and to prove it- guns are wrapped in American flags (some customers have gone home with guns than have been painted with stars and stripes). Veterans, good old boys, retired folk, the wealthy, all own guns- and much more than a rifle and shotgun for target practice or hunting.

It’s a great country! Workers at Gunsmoke and Red Jacket Arms declaim their love for job and guns..Their customers love their guns- sometimes promiscuously- several episodes of American Guns have visited collectors with scores of weapons. The four-gun arsenal of James Holmes (the Aurora, Colorado, merely 20 minutes drive from the Gunsmoke store shooter) is paltry when compared to the collections shown on TV.

As do shows on TV celebrate food, fashion, interior design or automobiles, these programs revel in weapons as simply objects of desire.  From what I see on TV, I’d have to conclude that there is nothing unusual about owning military weapons. Their terrible potential for creating mayhem and tragedy not withstanding, its no wonder so many of us want our very own assault rifle. They are bad-ass!